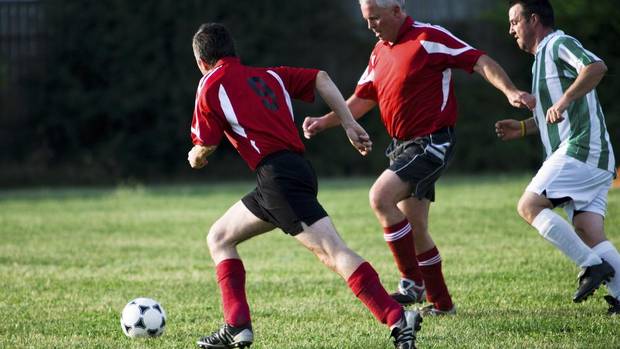 Countdown to Better Health After 40

It’s time to change society’s perception of what life after 40 can look and feel like.

Most research on aging paints a bleak picture of functional decline, decreased muscle mass and aerobic capacity and lower self-esteem.

This depressing view is combined with research findings that suggest feeling older is associated with greater negative mood in “youth-oriented” cultures such as Canada and the United States. This can lead to less favourable attitudes toward aging and the acceptance of self-limiting ageist stereotypes.

But before we give up and start planning the funeral, there are two important points to consider that can change everything.

First, most of the studies on aging have examined muscle changes and physical and functional decline in sedentary aging adults – not active ones.

A study of 40 high-level recreational athletes from the ages of 40 to 81 who trained four to five times a week found no decline in muscle mass.

Second, if taking action is important to counteract the negative effects of aging, then attitude adjustment is essential. One study from the University of Waterloo found that older subjective age predicted lower life satisfaction when attitudes toward aging were less favourable. In other words, feeling old is not the problem. Feeling old and seeing it as a bad thing may be the issue.

The outdated view of what a person should look, feel and move like after 40 is now only a limitation if you buy into it. Many people over 40 possess incredible strength, athleticism and vitality.

The way to get there is not to emulate the 20-year-olds at your local gym, which is a one-way ticket to the emergency room. Instead, make smart choices based on science and be consistent in your efforts.

Use this countdown as a blueprint for what life after 40 should be.

Seven to nine hours of sleep a night is recommended for most adults, yet few of us get that. Every hour of lost sleep a night increases our “sleep debt.” According to an article in Harvard Health Watch, studies have found that chronic sleep deprivation can lead to higher blood pressure, higher levels of stress hormones, a compromised immune system and signs of insulin resistance. The damage done by a week of missing 10 hours of sleep can be reversed by adding three to four extra hours of sleep on the weekend and an extra hour or two a night the following week until you have repaid the debt.

6 stretches for your hips, five days a week

Tight hips can wreak havoc on a 40-year-old spine. With so many leg muscles attaching to the pelvis, any restriction during activity can increase pressure on the low back, causing pain. The top six areas to stretch to promote back health, as outlined by Princeton University Athletic Medicine, are hip flexor, quadriceps, glute, IT band, adductor and dynamic hamstring.

5 protein-rich meals and snacks a day

If you are over 30, don’t eat enough high-quality protein and don’t lift moderately heavy things on a weekly basis, you are losing 3 to 5 per cent of your muscle mass a decade. A safe recommended protein intake for older men and women is 1 to 1.25 grams of high-quality protein per kilogram of body weight. If you are closer to 40 and more active in the weight room, these numbers may need to be increased. Try to eat high-quality protein at each meal, including fish, chicken and other lean meats, beans, legumes, nuts, seeds and quinoa.

The rate at which dietary protein can be absorbed and used to build muscle decreases with age. Research has shown that progressive workouts can significantly increase protein synthesis rates in as little as two weeks. Doing three strength-training workouts a week can help increase muscle gains, and gives the body 48 hours between workouts for optimal rest and recovery.

2 things you are grateful for each week

As the number of birthdays goes up, so does the number of responsibilities, which can lead to considerable stress and dissatisfaction. A 10-week study on gratitude found that those who wrote a few sentences a week about what they were grateful for were more optimistic and felt better about their lives than their neutral or negative-minded peers. As a bonus, they worked out more and had fewer doctor visits than those who focused on negative sources of aggravation.

Medical evidence shows that core-endurance exercises can help prevent low-back pain. Studies have found that for untrained people, the magic number for strength and endurance gains in the low back is one such workout a week, with no added benefit to more sessions. As you adapt, you can increase your frequency.

With age, healing from injury takes more time. Be smarter with your body to avoid unnecessary risks that will limit your quality of life. Avoid the same activities and intensity levels two days in a row to reduce the chance of strain. If you don’t want to be stuck lying on a couch or under an ice pack, train smart. Train for life.

Sorry, the comment form is closed at this time.